All sorts of cameras are available in the market. The smartphone makers put all kinds of Technology into smartphone cameras, stabilization of them. And then we have action cameras that have gotten better produce stabilized footage.

If you have been using your smartphone camera for the action cameras to make videos, there is hardly any need for symbols since the stabilization is good enough.

Slightly, the cameras cannot be said, be it the digital SLR cameras the mirrorless cameras for even the point and shoot cameras. If you want to produce smooth footage using your big camera, it will take a lot of skill to do that.

Also, people who use big cameras are often serious about the kind of footage they want, and they already know whether or not they won’t pay bills. But when it comes to a hobby, who have God digital point and shoot cameras such as the Sony RX100 series for the latest Sony Z1 or even the Canon PowerShot series.

Although I specifically bought it for the Sony ZV1, because the pricing is pretty interesting, no one can say no to.

The Hohem iSteady Multi is available on Amazon for just $149. The vlogger kit that contains the handgrip with controls for Sony ZV1 also costs $149, which makes the Hohen iSteady Multi even more desirable since it offers controls for Sony cameras if you connect them with the Sony exclusive cable given in the box. Plus, its also a gimbal.

What’s in the Box? 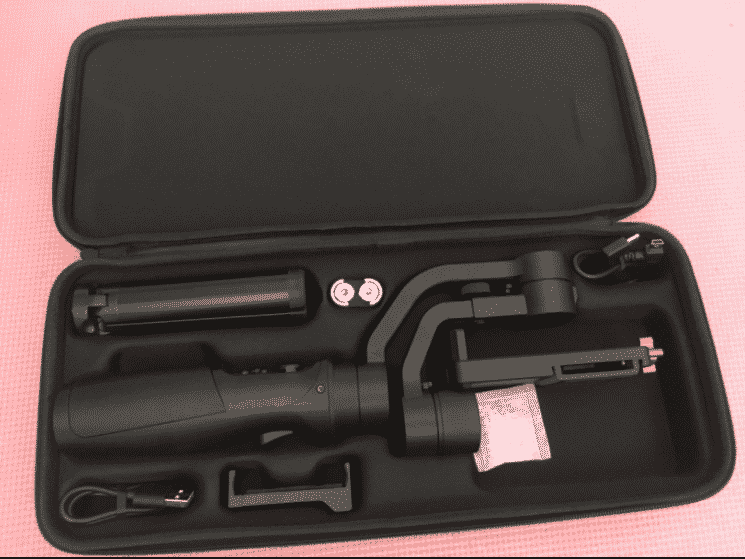 When you open the box, you get everything inside a hard case, making it easy to carry the Gimbal.

In the case, you have the Gimbal, a tripod stand, a Manfrotto Quick Release Plate, a Mobile stand, a GoPro thread and two thumbscrews (one spare actually). And there is a quick release plate for mounting Point and Shoot Camera using the thumbscrews.

There is one micro USB cable to charge the Gimbal, and there is also another Cable for Sony Cameras that let you use the controls on the Gimbal to control the camera. 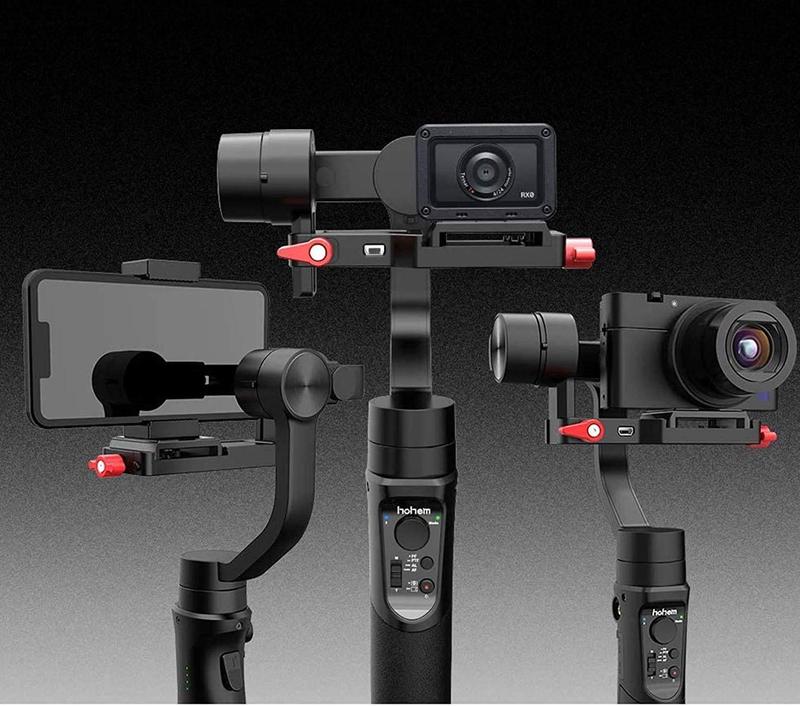 The build quality is not that great, it’s all plastic, but it’s also not super expensive, hence compromising the built quality. You’ll do fine if you handle it properly. Gimbals anyway need proper care because of the Motors inside.

There is a microUSB slot for charging as well as a Type A for using the 3600mAh batteries inside the simbal to charge other devices. The full charge can be achieved in 3.5 hours and can last for up to 8 hours as claimed by the company, but expect it to be around 6 hours. But that too is quite enough for a single or maybe even multiple shooting sessions.

A slot on the Gimbal used for connecting it to Sony Cameras can let you use the controls on the Gimbal to zoom in / zoom out, take photos,  and start/stop recording.

The more prominent feature of the Hohem iSteady Multi the Gimbal is its multipurpose use. You can use your Smartphone, Point and Shoot Cameras under 400grams and Action cameras with it.

There is a joystick on the Gimbal that lets you Pan and Tilt. The power buttons aso doubles up as control for Sony cameras for Taking a photo or recording video.

There’s another button to use functions like Pan Follow (PF), Pan Tilt Follow (PTF), All Locked (AL), and All Follow (AF). A number of dots mention the number of times you can press the button to activate the function.

PF mode only makes the Gimbal mode in the right or left direction when you move the Gimbal.

PTF means it wil also do up and down movements, AL means camera looks in the same direction regardless of the movement, and AF is whenever does Pan, Tilt and slight Rotation as well.

Setting of the Gimbal And Balancing the Camera

It is a little tricky to balance the digital camera, because when you turn it on, the lens will pop out, so you have to balance it by keeping the camera turned on, or as it will put extra strain on the Motors.

The first attempt took me around 10 minutes to balance, but once you know how it’s done, the next time will not take that long.

After the balancing is done, you can long-press on the power button to turn on on the Gimbal.

You can use the provided Sony cable to use the same power button to start recording on the camera. A single click will take a photo, and double click will start/stop the recording.

There is another button on the Gimbal that’s accessible by your finger. A single press will reset the camera’s position to look at the front, and the double press will activate Sports mode, more about it in creative shots section.

Connecting and Control via the Smartphone App. 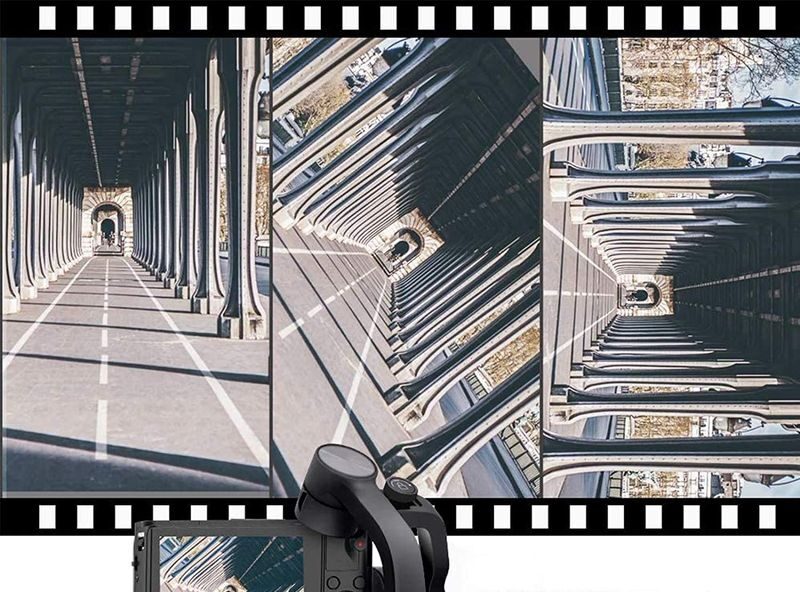 Hohem has an all you can install on your Smartphone and Connect to the Gimbal via Bluetooth.

I used the Android app to connect with the Gimbal. Launch the app, select and Connect. It’s pretty simple.

There isn’t a lot of function available inside the app, but it lets you control the Gamble to use the virtual joystick for tilt and PAN. And if Sony camera is connected, you can also take photos and start their recording.

Apart from that, there is a motion lapse feature where you can select the Gimbal points and select the time. You can set multiple Points, and it will Pan or Tilt from A to B to C and so on.

The feature is pretty useful for taking dynamic time-lapses, but I have also found them to help carry your own moving shots. You select different points for Camera to Pan and then record yourself to get a moving camera shot as I did for one of my videos. 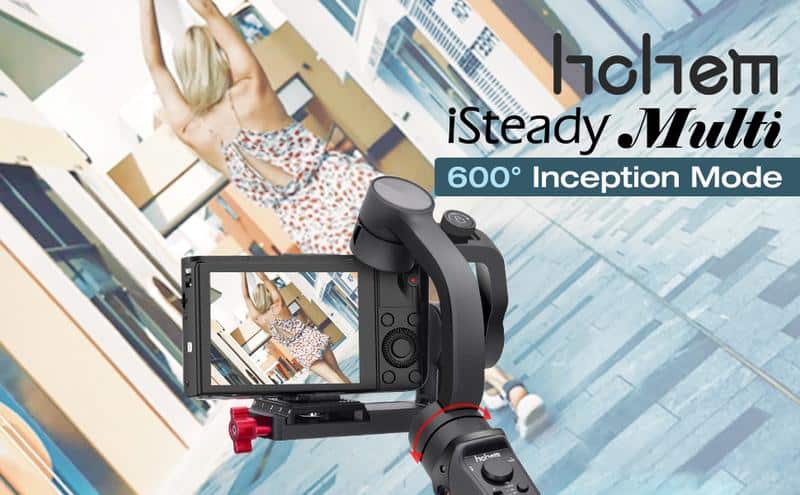 You can use the Gamble anyway you want to have smooth footage, but there are some predefined creative shots you can take using the Gamble that makes it easy for anyone to have some really cool videos.

The creative shots are

Inception mode – where the camera rotates as you move forward or backward holding the gimble.

There is also a Sports mode, which makes the simple pan faster to catch the action. And there’s actually a button on the Gimbal to activate it. I haven’t tried yet, though.

You can watch the review video to see some test footage and the difference it makes in stabilization.

Now, Gimbal is a must-have when you have to do client work, where you have to shoot weddings, promotional videos, product shots. But then people have DSLRs for that.

So, this Gimbal is not really targetting professionals. But people who make videos on YouTube or maybe their personal videos. You now have an option to stabilize your videos without having to spend a lot of money.

Also, It’s not ideal for vlogging. The time is wil take to mount and balance the Gimbal, and then also keeping one more battery-operated thing charged will be a lot for a vlogger. They would simply use a smartphone to stabilize (OIS) or just by an Action Camera. The stabilization you’ll get will be great for vlogging.

Having said that, this Gimbal can be used for B-Rolls. I have a big camera which is always on a Tripod, and then I have SonyZV1 for quick B-Roll videos. Having a Gimbal like this handy allows me to take videos that wil be smoother than handheld.